Detailed and personalized, this 27 page assessment provides leaders at all levels with the tools to be successful.  Learn about your ability to delegate, communicate and work with others.  Specific leadership development information includes:

1. Understanding Yourself and Your Team

With over 30 million users and the most highly validated and accurate methodology available, Everything DiSC is your solution to better understanding of yourself and others in a complex world.

Everything DiSC Management is designed for all levels of leadership including supervisors, managers and executives.

PLEASE NOTE:  Volume discounts are automatically calculated at checkout and all assessment access codes will be delivered via email. within 24 hours of your order. 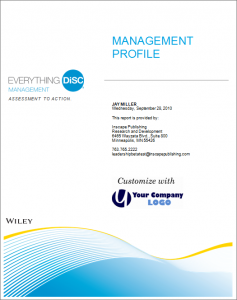 Everything DiSC Management uses adaptive testing—an interactive assessment process that tailors questions based on an individual’s responses—to give participants the most precise DiSC style assignment possible. 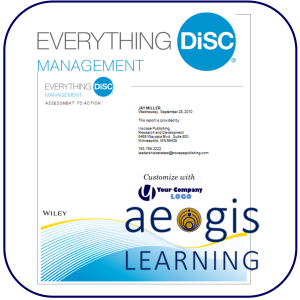 Everything DiSC Management is best used with:

Applications for Everything DiSC Management include:

Everything DiSC Management will improve understanding and performance related to:

Within 24 hours of your order being processed, you will receive an email with your link and access code.  This access code can also be entered into the link below.

The assessment itself will take no longer than 30 minutes to complete.  Upon completion you will receive an email with a link to the results (please save the file as a PDF or print it) and a link to MyEverythingDiSC.com to learn more about your results.

Aegis Learning is here for you.  Please contact us for any needs or questions along the way.  Customer Service Link

The power of DiSC comes in how it is used.  Each DiSC assessment offers some outstanding follow-up and additional learning tools to keep your new awareness and skills living for years to come.

Discover much more about your style and approach with this FREE tool.  Create an account, log in at www.myeverthingdisc.com and:

Please contact us if you have taken an assessment and your login information needs to be resent.

Understanding Yourself and Others (Coming Soon Online):

This FREE online learning program is packed with skills, tips and tactics for you to improve self-awareness, understanding of others and your own adaptation strategies.

Exciting follow-up reports that can be created for any two
participants. Shows their similarities and differences on six behavioral continua. Great for on-boarding, new work groups, conflict management, and more! Unlimited access available with all Everything DiSC profiles.

Helps you determine the group’s DiSC culture, explore its advantages and disadvantages, discuss its effect on group members, and examine its influence on decision making and risk taking. English only. Sold separately.

Provides an at-a-glance view of any group’s individual Everything DiSC maps. 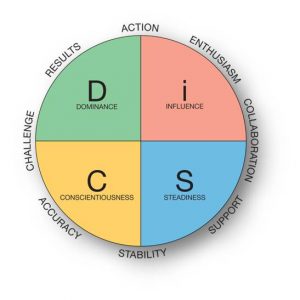 DiSC is an acronym that stands for Dominance, Influence, Steadiness and Conscientiousness.

This assessment is a highly accurate measurement of behavior that drives our most common working interactions.  This instrument will uncover key ways to connect better with others and understand yourself on a much better level.  DiSC can be used to gauge how people communicate, work in groups, lead others, deal with conflict and make decisions.

The DiSC Model of Behavior was first proposed by William Mouton Marston, a physiological psychologist with a Ph.D. from Harvard.  His 1928 book, Emotions of Normal People, explains his theory on how normal human emotions lead to behavioral differences among groups of people and how a person’s behavior might change over time. His work focused on directly observable and measurable psychological phenomena. He was interested in using practical explanations to help people understand and manage their experiences and relationships. 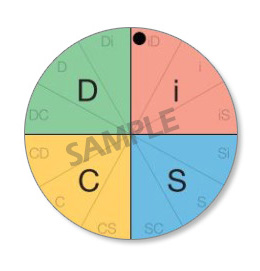 My Dot on the Graph:

The dot on your DiSC graph will rest in one of the four quadrants. That landing spot will represent your predominant behavioral and personality trait. 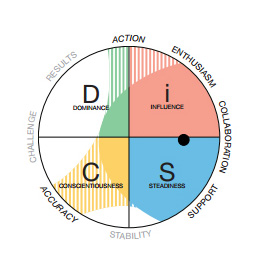 Shading is another factor. Your shading on your graph shows the influence of the other styles on your primary style. Where you have shading and thatching are areas where you will relate to and connect easily with people whose dot resides in those areas.

The newest versions of the DiSC assessment have the highest degrees of accuracy in any behavioral assessment or psychometric tool. They utilize an algorithm called Adaptive Testing to insure results are specific and accurate.

Continued research and constant validation also insure that every DiSC tool has the highest accuracy available.

If you don’t believe us, hand the narrative page to a friend, spouse or significant other and ask for their feedback on who is portrayed in the results.

All discounts are automatically applied upon checkout and purchase.