Mindfulness is a science based approach to become more comfortable, aware, and ultimately, more successful in your life. It has often been described as the ability to be present in any situation and reduce the anxiety of the future and the regrets of the past. The practice of mindfulness will help you connect more successfully with others, eliminate stress, have more focus on the projects and tasks that matter and develop a sense of acceptance of your own strengths and challenges.

When applied to leadership, mindfulness compliments skills and competencies perfectly. The mindful leader is significantly more likely to apply the needed skills for leadership more consistently and with greater impact. Quite simply, a mindful leader will communicate, engage, coach and empower better.

The Mindful Leader is best used with: 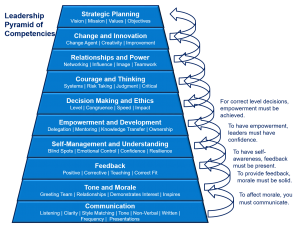 Leadership is a set of learned competencies, that when mastered, create great synergy between team members and the leader and drive significantly higher results for any organization.  Anyone can learn leadership and anyone can become a leader. The baseline concept for leadership is a people focus.

People are led and processes are managed.  Outstanding leaders are people focused.  This is a non-negotiable reality.

The research and work for the competencies associated with leadership and management began in 1992. The results were first published, based on a limited sampling size, in 1993. The data and conclusions were again published and revalidated in 1996, 2003, 2010 and 2014.

Although discouraged on several occasions, the work used both quantitative and qualitative methods. The qualitative research related to the grouping and clustering of skills into competencies and competency groups. Simply stated, clarity is a skill in the competency of communication. Leadership then becomes a cluster of ten competencies.

The original sampling size was a little over 1,000 respondents with 700 being noted as successful leaders and 300 being failed leaders. The current database has 11,616 respondents with approximately the same ratio of success to failure.

The Process for Online Learning:

Within 24 hours of your order being processed, you will receive an email with your link and access code.

Aegis Learning is here for you.  Please contact us for any needs or questions along the way.

All discounts are automatically applied upon checkout and purchase.  Online learning programs are free for prior participants and customers of Aegis Learning and SEE, Inc. (Soaring Eagle Enterprises).  Use coupon code “CUSTOMER” on checkout.